Dance the day (and the night) away all this week during Pure Pop Radio’s Swinging New Music Dance Party. Here are more of the new artists and songs that have been added to our playlist, all now playing in rotation!

Tony ‘n’ the Recruiters | “Dirty Water”
The Standells’ classic “Dirty Water” sizzled into the number 11 spot on Billboard’s Hot 100 chart in July of 1966. It’s still sizzling today, this story of dirty water and curfews and women and, yes, Boston, spoken/sung/snarled by Dick Dodd over one of the great, meaty, down-and-dirty guitar riffs of all time. Guitarist Tony Valentino is still at it–still spreading the dirty gospel by playing the song live and by waxing a brand-new recording of it that sizzles like the original so a whole new generation and older fans, too, can get down and dirty with it in the context of today’s skewed world. This new version, produced by Tony and sung with pumped up passion by Steve Loizos, is lit up at a faster pace, chugging through the last measure of the chorus with a thrilling, ascending chord pattern, and it’s all to get the pressure rising, which it does and which it should. This track won’t calm anyone down, but it’s not supposed to. Take a bow, Tony; we’ll all wade through that dirty water with you anytime. 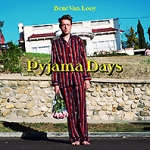 Bent Van Looy | Pyjama Days
Bent Van Looy, based in Paris, France and a member of the band Das Pop, released his first solo album, Round the Bend, produced by Jason Falkner, in 2013. This top-notch follow-up, released this past March, is a lovely collection of sweet-sounding catchy melodies sung with assured style. Every song sparkles; every song will make you smile, from the upbeat pop number “My Escape,” beautifully arranged with little Beach Boys vocal flourishes weaved in; “Mr. Fletcher’s Song,” a melodic mid-tempo ballad that wouldn’t sound out of place on a Randy Newman album, and the sumptuous title track, a three-minute genius construct, nicely orchestrated and adorned with a smile-inducing whistle. The next time a friend asks what’s new–what’s good–you can point to this artist, to this album, and tell them it’s not just good…it’s great.

Drums and Wires UK | “All the Things” and “I Should Have Known”
Ex-Squire bassist Jonathan Bicknell’s current project will be releasing, later this year, a concept album titled Ups, Downs and Merry Go Rounds,  which concerns itself with the trials and tribulations of life. Until then, we have this smashing single pairing a couple of power popping classics. Performed with gusto and infused with strong melodies and passionate playing, I’m sufficiently jazzed for the album’s arrival.

Where to Get It: iTunes

Corey Landis | Therapy Dog
The precursor to Corey Landis and the Attacks, added to our playlist this past Wednesday, is a different beast all around, but no less vital. More of a personal approach informs these songs, three of which are now playing in rotation: the emotional waltz “Poltergeist,” the equally emotional title  track, and the punchy, quirky “Airport.” Corey Landis is one of my favorite, recent discoveries.

The Del Zorros | “Yes I Want You (We’re Gonna be Married)”
Lance and Leigh Bowser’s latest is a sweet, pretty paean to love, love, love. It’s the same old story with the Del Zorros–infectious melodies, top-flight songcraft, and the ability to push the right, catchy buttons each and every time. Why, oh why, can’t these guys release a new song every day, ’cause that would suit me just fine.

The Recreations | “Swing Together”
Update: My pal Scott McPherson (Tiny Volcano, Pop 4, McPherson Grant) turned me on to this amazing track, and I reviewed it in early May. I’d like to echo and expand on my earlier rave: Fronted by pop visionary Yohei, this is a vital mix of soft pop, Burt Bacharach, Jellyfish, swing and jazz that comes together as a wholly unique creation you will never forget. A true kitchen-sink production. You’ll be singing this one to yourself for a month after hearing it. From Tokyo to your waiting ears.
Now playing in rotation on Pure Pop Radio.

Where to Listen to It (Other than Pure Pop Radio): Soundcloud (This song is not yet available for purchase.)

Tomorrow, I’ll be doing maintenance on our virtual dance floor, which is taking some beating, what with all the dancing shoes a-scuffing it up! I’ll be back on Thursday and Friday with more reviews of new music being added to the Pure Pop Radio playlist! Meanwhile, tune in by clicking on one of the listen links below, and enjoy!