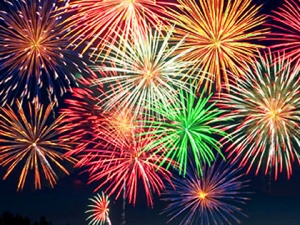 During those lazy, hazy, crazy days of summer, before I towered over my classmates and probably before I tried to make chewing gum with my chemistry set and covered the walls of my bedroom in sticky goop, I would arrange my growing collection of comic books in alphabetical or character order, or stack them in order of how potent their super powers were, which meant that Superman was always on top because he could bend steel in his bare hands, and who else could do that?

Coming around each and every year like clockwork was the arrival, on the night before the fourth of July, of my father from work around seven o’clock, resplendent in his work suit, holding a small bag that looked suspiciously like it was holding a box of spaghetti, only it was actually holding a box of sparklers. You could twirl spaghetti, providing it was boiled just right, but you couldn’t twirl, after a fashion, sparklers or do, really, much of anything with them. You could hold them and wave them in the air and run around the yard with them, and finally you could drop them to the grass as they fizzled out like warriors giving up the ghost.

After 10 or 15 minutes of running around the front yard with lit sparklers in my hands, trampling over the grass as if I was on military maneuvers, there would be nothing left to sparkle and I would retreat to the den to watch television or to my room to play a couple of records or, sometimes, I would grab a mason jar, punch a couple of holes in the cap with a nail and a hammer, and catch some fireflies. Unlike sparklers, they did seem to light up the early evening sky, although at a very low wattage.

The next day, we wouldn’t ever hear about kids running around on their front lawns waving sparklers, but we would always hear about kids shooting off firecrackers or more elaborate fireworks on their lawns and, more often than seemed fair, there were stories on the news of kids losing fingers or worse and, in the newspaper, there inevitably were pictures of sobbing parents who were faced with realities they would rather not have had to endure. Even with their eyes closed tight, they could not erase the images of their sons and daughters, painted with washed-out brushstrokes.

Which is to say that, even though at the time, as a kid during those lazy days of summer, when I cried out “That’s not fair!” to my father on the night before the fourth of July when he unveiled the usual box of sparklers, when I wanted desperately for that box to contain firecrackers or something that would shoot into the sky and explode with coordinated, colorful wonder, I knew that, deep in my heart, he was trading momentary, explosive thrills for safety. Today, when I think about those long gone days, I know that that yearly disappointment was carried out by my father for my own good.

Be safe this weekend as the early and late evening and early morning skies light up with joyous celebration. I’m taking off a few days, but I’ll be back midweek, next week, with more new music added to the Pure Pop Radio playlist. This weekend, be sure to make Pure Pop Radio the soundtrack of your fourth of July festivities. These are still, as they have always been, the lazy, crazy, hazy days of summer. Sing along with Nat King Cole, if you know the words, and have a happy 4th.

Listen to Pure Pop Radio on the go! Download Our Mobile App.