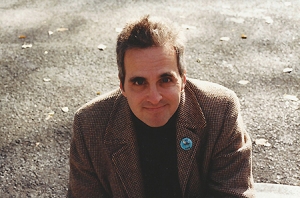 On Wednesday, November 9 at 9 pm ET, hear Glen “Lefty Weekling” Burtnik play live in-studio during a 1997 appearance on the old weekly Pure Pop Radio show as part of our Eight Days a Weekling marathon, celebrating the release on November 18 of The Weeklings’ new album, Studio 2.

For the first time in nearly 20 years, Glen Burtnik and Weeklings fans will hear a landmark broadcast that occurred live on July 5, 1997, when the weekly Pure Pop Radio show was broadcast out of WEBR radio. Glen, traveling from exit 9 in New Jersey, played, along with his band, at an outdoor concert in the town of Herndon, Virginia on July 4, and solo at the Rhodeside Grill on the evening of July 3.

Glen had traveled from exit 9 in New Jersey to play, along with his band, at the Friday Night Live! stage in Herndon, Virginia on July 4, and solo at the Rhodeside Grill on the evening of July 3. His other stop was on Saturday, July 5.

That July 5 in-studio performance and interview with me at WEBR was a watershed moment in the history of the Pure Pop Radio show, then still in its infancy, having begun two years earlier in 1995. When the scoped (without music) version of the appearance was posted on our old buhdge website, it was accompanied by my passionate remembrance; it appears below nearly exactly as originally posted, with only a few stylistic changes made:

After hearing Glen Burtnik’s incredible, hall-of-fame album Palookaville, and playing tracks from it on Pure Pop, I received a short e-mail from the artist himself that went something like this: “Who are you and why are U playing my songs?” I wrote back, explaining who I was and pretty soon, I was asking him if he wouldn’t mind being interviewed. It would have been easy to do the interview by phone, but I thought it would be better meeting him in person.

So I asked if there were a place near where he lived where we could talk. A New Jersey guy, Burtnik suggested meeting near Central Park in New York City. I figured I could combine the interview with a trip to Long Island to see my family, so my wife and I hopped in the car and drove to the Big Apple.

Burtnik said he would be the guy on the sidewalk wearing a grey overcoat and…an Elvis pin. He was exactly as billed, standing just outside of the park. We went looking for a place to do the interview, and decided to seek out one of the many coffee shops in the neighborhood. Except there weren’t many to choose from–only one, in fact, which is where we sat down to talk about Palookaville.

After the interview, Burtnik and I went to Strawberry Fields in Central Park, the area dedicated to John Lennon, where we talked some more and where I took some pictures… As we prepared to go our separate ways, I asked Burtnik if there was a song he wished he’d written, and he said he wished he’d written Paul McCartney’s “Little Lamb Dragonfly” from Red Rose Speedway. I said I liked that song, we shook hands, and off we went.

Aside from the interview, which is one of my favorites of all that I have done over the years, Burtnik appeared on Pure Pop a number of times by telephone, and one extremely memorable time in the radio studio. Even his car breaking down on the way to Virginia, where the Pure Pop studios were located, couldn’t stop the mighty Burtnik from his appointed rounds.

Before appearing on Pure Pop, Burtnik and his band played a high-energy set on [the Friday Night Live! stage in Herndon,Virginia] on Friday, July 4th. The night before, he did a solo turn, along with John Wicks of the Records, at a local Virginia eatery, [the Rhodeside Grill, in Arlington]. Then, on Saturday, July 5th, he made his way to our studios at WEBR. That day was memorably hot and steamy, which made the freshly re-paved parking lot uninhabitable by cars. Burtnik’s vehicle had to be parked on the industrial road just outside of the lot. Thankfully, the singer found a spot near the lot’s entrance.

I asked Burtnik to bring an acoustic guitar to the show. He graced me and my audience with live versions of the hit song he co-wrote with Patty Smyth, “Sometimes Love Just Ain’t Enough,” and his own “Watching the World Go By,” from Palookaville. Burtnik’s guitar playing and singing were equally exquisite. Watching him play, I found it interesting that the left handed singer plays a right-handed-strung guitar upside down…

Listen and be magically transported back to the afternoon of Saturday, July 5, 1997 and enjoy the live, acoustic in-studio performance by Glen Burtnik, and some great talk with me, on Wednesday, November 9 at 9 pm ET. Glen and Weeklings fans won’t want to miss this!