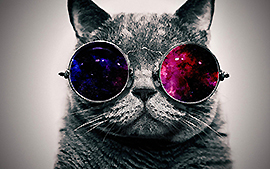 We check in this Friday afternoon with a super-cool two-fer (plus one) add to the Pure Pop Radio playlist. Be like our cool pal pictured above and marvel at today’s tuneful treasures:

The Hangabouts | Illustrated Bird Remixed and remastered from a previous digital-only release, and sporting a previously-unheard song recorded at the original album sessions, the Hangabouts’ Illustrated Bird delivers some truly catchy songs in which the band members, John Lowry and Greg Addington, are obviously invested (new member Chip Saam oversaw this re-release project). You’ll hear influences from far (America) to wide (The Lilac Time, the Red Button and the Byrds) that help to bring some infectious melodies to life. We’ve added eight songs: “Roman Forum,” “Cut Down,” “Love Nothing,” “Illustrated Bird,” “She Hates You,” “Missing in Action,” “Forest for the Trees,” and “Go to Sleep.” Dreamy.

Vanilla | “Hold Me Like a Grudge” The latest song unveiled along the way toward the release of Vanilla’s forthcoming blockbuster album, “Hold Me Like a Grudge” is perhaps the ultimate “It’s her fault!” tune and another sterling example of the kind of top-notch songcraft being practiced by Jayson Jarmon and his pals. When Vanilla 2.0 is released, you’re going to be blown away. (Thanks to Jayson for this radio edit.)

The Rip Off Artists | The Intercontinental From Nick Pipitone and Peter Batchelder comes their second album as the Rip Off Artists. The Intercontinental is a collection of good old fashioned pop songs sporting catchy melodies and deep hooks, which makes it the kind of fare that Pure Pop Radio listeners crave. Dig the six songs we’ve added to our playlist: the cleverly titled “Inside the Actor’s Studio Apartment,” “Mr. Right and Mrs. Right,” “Worst Case Scenario,” “The Tennis Instructor,” “Bachelor of Arts,” and “The Day that I Disappeared.”

We’ll be back next week with more adds to our playlist, possibly a review, and who knows what else? See you then!