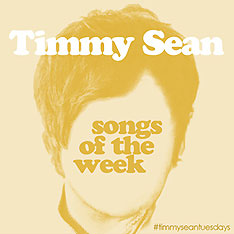 Following two original songs made available as part of his ambitious Songs of the Week project, musician extraordinaire Timmy Sean has seeded week three’s slot with a poppified cover of Bachman-Turner Overdrive’s “You Ain’t Seen Nothing Yet.” B-b-b-baby, it’s something that you’re never gonna forget!

“Anyway, they ended up going (in) a completely different direction for the commercial, but at least it left me with an apropos song title if I really wanted to sound cocky about what else I have coming this year…which I don’t…so, maybe we can re-title it ‘You’ve Seen Something…And There’s More That’s Probably, Give-Or-Take, Roughly The Same Quality.'”

There’s no roughly about it from our perspective: This is Timmy Sean at his best, tearing it up with a classic rock staple, Timmy Sean-style. Dig those poppy background harmonies near the end of the track.

Forty-nine songs to go, as Timmy Sean hits the bricks behind the scenes for week number four’s tune. Check back here next week for the skinny on the next entry in the Songs of the Week project! And check out Timmy’s Bandcamp page, where you can purchase these very cool tunes!