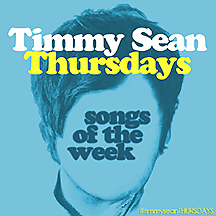 Week 28’s entry in Timmy Sean’s Songs of the Week project was entitled “Seventeen.” Timmy has followed up that Ben Folds-ian track with the logically-named successor “Eighteen,” a transcendent number that shows off the artist’s acoustic guitar dexterity and his love and mastery of melody.

“Eighteen” previously existed as a vehicle for Timmy’s band Luzer, having appeared on the group’s Fake Ass Rock Star EP-isode II album in 2002. This sensitive, acoustic version shows off everything we love about Timmy’s work: powerful, emotive vocals and his ability to hook the listener right out of the box. Light percussion and feather-light keyboard touches complement the seemingly effortless acoustic guitar parts.

Timmy says: “After releasing the brand new song ‘Seventeen’ last week, which I described as a prequel of sorts to a LUZER song I wrote at the age of 18 entitled (appropriately enough) ‘Eighteen,’ I decided to go back and revisit the original song. When LUZER formed, I was the oldest member, being all of 16 year old. Suffice it to say, there’s some songs in our early catalog that I’m embarrassed by. This one though, although a little on the melodramatic side lyrically (I mean, what isn’t melodramatic when you’re in high school), I thought held up pretty well. So, I decided to dust this one off for the first time in many-a-year as a little companion track to last week’s ‘Seventeen.’ Here is a brand new acoustic version of the LUZER track ‘Eighteen,’ as written by 18-year old Timmy Sean.“

This is another must-get for Timmy Sean fans. Add Timmy Sean’s acoustic version of Luzer’s “Eighteen” to your collection by clicking here. To get all of Timmy’s music, click here.