Tonight’s rebroadcast of Pure Pop Radio: In Conversation takes listeners back to the end of April of this year, for a program during which author and Goldmine magazine columnist John Borack talks about the tribute to Elvis Costello he co-produced with his friend Olivia Frain. Tune in at 7 pm ET (4 pm PT) tonight. 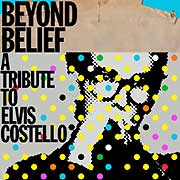 When this show first aired this past April 29th, we wrote, “Beyond Belief: A Tribute to Elvis Costello presents 50 artists paying homage to the writer and performer of such classic songs as ‘Alison,’ ‘Pump It Up,’ ‘Everyday I Write the Book,’ ‘Welcome to the Working Week,’ and ‘Radio Sweetheart,’ among so many others. Artists appearing on Beyond Belief, such as the Rubinoos, Matthew Sweet, David Myhr, Chris Richards and the Subtractions, and Bill Lloyd deliver classic performances that put the spotlight on an artist who has been setting the bar higher and higher since he exploded on the music scene nearly four decades ago.

“Comprising 50 songs on three CDs, Beyond Belief is a standout example of the art of compilation. John goes in-depth with Alan Haber, detailing every step from the spark of the idea to the tribute’s release. Musicians, Elvis Costello fans, and lovers of great music alike will be fascinated by this engaging program, during which three songs from this hall-of-fame-worthy set, released by Spyderpop Records, will be played.”

Don’t miss this rebroadcast of Alan’s interview with John Borack. Click on one of the links below to listen at 7 pm ET (4 pm PT) tonight.