The ubiquitous they never look at us and say “Hey, hey, you’re the Monkees,” because the Monkees are and always will be Micky Dolenz, Peter Tork, Mike Nesmith and the late, great Davy Jones. They can and do, however, say “Hey, hey, the Monkees have a big hit album out” because, hey, hey, that’s the fact, Jack (and you too, Jill).

The Monkees’ new album Good Times!, celebrating the group’s 50th anniversary, is the order of (Monkee) business today. And here it comes, walking down the street…

The Monkees | Good Times!
A review by Alan Haber 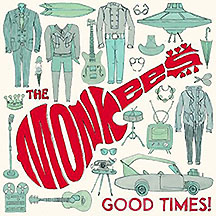 I have an image in my mind, indelible really, of sitting on the floor in my pajamas as close to my family’s television set as humanly possible; the set sat in an ornate, maple wood cabinet my father built on four spindly legs. We had to roll the accordion-style cover from left to right to reveal the screen and get to the on-off switch and channel changer. Caveman days, to be sure. 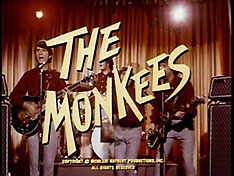 Week after week, as the Monkees’ latest adventures spooled out over the NBC television network, I sat transfixed; I imagined myself as the fifth Monkee, traveling alongside Micky Dolenz, Peter Tork, Mike Nesmith, and Davy Jones as their crazy world exploded around and on top of them. All of this televised insanity, which seemed so real to me, told my friends and I that our humdrum existence as young school kids, whose lives were stuffed with after-school chores and allowances that could only be stretched so much, could be so much more exciting if only we could ride around in our own, customized Monkeemobile. 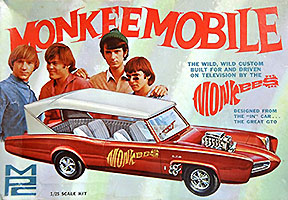 My weekly television date with the fabulous foursome, combined with the records that were forthcoming and the radio play that quickly seemed ever present, was proof positive that the Monkees were here to stay, here being those halcyon days peeling off the calendar beginning in the fall of 1966. And, later on, thanks to Rhino Records’ extensive reissue program that saw the original Monkees albums paired with voluminous extras, “here to stay” really meant and continues to mean “forever.”

These days, nostalgia fuels the marketplace; beloved television series from years gone by, from the X-Files to Full House, are reborn as updated shows, and favorite albums, such as ABC’s The Lexicon of Love, get sequels. In the case of the Monkees, nostalgia is only one element of the public’s ongoing love affair with the group: the music was good and memorable, written by top-flight songwriters such as Carole King and Neil Diamond, and has more than stood the test of time, playing through the years on oldies stations and satellite radio.

The spirit of the Monkees’ television show, powered by the engaging personalities of its musician-stars and the memories of the catchy music the group recorded, has shown no signs of abating. Proof positive of that has just been released in the form of an album called Good Times!, which you probably have heard of, unless you’ve been talking to the Chief inside the Cone of Silence. 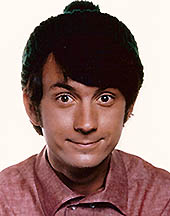 Reams of speculation on the Internet, the hub of accuracy in this electronic age, sent Monkees fans into a huge, forceful tizzy during the months preceding the release of Good Times!. Was Mike fully involved? Would Mike be joining Micky and Peter on their concert tour? Would Mike be wearing his trademark wooly hat? (Okay, I made that last one up.) Come to think of it, there was a lot of speculation about Mike. The answers, as it turned out, were a) just about, b) when possible, and c) not likely (that was my guess about the wooly hat).

Moreover, whispering voices across the Interwebs wondered if Good Times! would be any good. The fact, I’m here to pronounce, is that the album is very, very good, sometimes even great; not only is it a classic-sounding pop music album, it’s a classic-sounding Monkees album that happens to have been released 50 years after Monkeemania began.

A mix of recordings based on sessions produced during the Monkees’ heyday and new songs written by top-flight, current songwriters of note, Good Times! is a fun listen from start to finish. The songs, for the most part, sound like they could have appeared on just about any of the original group albums. There’s a reason this album is proving to be so popular–it’s really good. 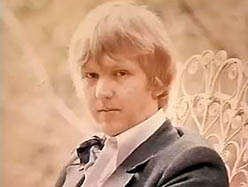 The title song, which opens the album, is a track built on a 1968 demo; Harry Nilsson’s song, on which he shares vocal duties with Micky Dolenz through a sweet feat of electronic legerdemain, sets the stage for Good Times! with a very Nilsson-esque, infectious go-go beat. It’s a kick and a half to hear Micky trade verses and harmonize with Harry. The spirit is infectious and amounts to what is no less than a glorious musical trip. 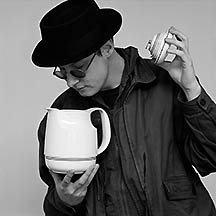 XTC’s Andy Partridge is the first of the famous scribes to be represented in Good Times!’ running order with a new song. His perky, catchy “You Bring the Summer” is prime Partridge; you don’t have to stretch your ears to imagine hearing the author singing along with Micky and Mike. The message? Summer means happy (“Summer for a sad old Jack Frost/Trying to warm his toes/Summer from your golden smile/Will paint the snowdrops pinky rose”). An instant classic, as are River Cuomo’s “She Makes Me Laugh” and producer Adam “Fountains of Wayne” Schlesinger’s “Our Own World,” both blessed with wonderful melodies and deep hooks.

Neil Diamond’s “Love to Love,” initially crafted in 1967 and 1969 and finished in February of this year, is a very Diamond-esque number sung by the late Davy Jones, thanks to the miracle of studio magic. (This song also appeared on Rhino’s Missing Links Volume Three.) Similarly, Carole King and Gerry Goffin’s classic “Wasn’t Born to Follow” was started in March of 1968 and finished this year with a terrific Peter Tork vocal.

As to Mike’s participation, the news is, well, good (times). The wooly-hatted one appears on eight of the album’s 13 songs, including the one he wrote, a terrific, piano-based number with the writer’s lovely vocal, “I Know What I Know.” Mike, along with Micky, is at the vocal helm of the slightly-psychedelic and monumental “Birth of an Accidental Hipster,” written by the perhaps unlikely combo of Noel Gallagher and Paul Weller. The song, which didn’t have a home until it wound up in the hands of the Monkees, is a tremendous, multi-part, multi-mood extravaganza, a real barnstormer of a track. 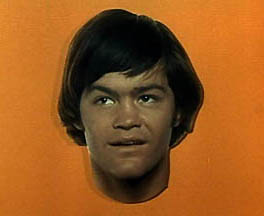 The album’s closer, “I Was There (And I’m Told I Had a Good Time),” somewhat reminiscent musically of Paul McCartney’s “Flaming Pie,” is a pumping, fun co-write from Micky and Schlesinger. It is most certainly a highlight of this album. There are many others, of course, but it would be a disservice to you to talk about all of them when part of the fun of this album is discovery.

There are several bonus tracks that appear on various incarnations of Good Times!, such as “Terrifying,” a catchy, mid-tempo, should-be-hit-bound pop song written by Rogue Wave’s Zach Rogue, and an alternate, uptempo version of Ben Gibbard’s “Me and Magdalena,” which appears on the album in slow-to-mid-tempo form; both come with the iTunes version of this album. (I’ll leave it up to you as to which version of the latter is better; I would have opted for the faster one, but both are really good.) There are other bonuses, such as Andy Partridge’s “Love’s What I Want,” which appears on the Japanese CD and on Barnes and Noble’s upcoming vinyl release. Although this kind of marketplace maneuvering is commonplace, it would have been better to have made all of the tracks available everywhere at the same time. 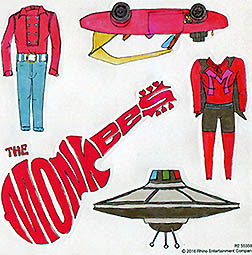 Joined by such familiar pop musicians as Mike Viola and Fountains of Wayne’s Jody Porter and Brian Young, Schlesinger has helped the Monkees to create a phenomenal album that will not only please fans, but will likely gain them new fans and spur the surviving members of the band on to record more albums in the future. That’s the hope, at least, and by virtue of the overwhelming groundswell of support for Good Times!, this doesn’t seem at all outside of the realm of possibility. (And let’s give a big round of applause for Rory Wilson’s lively and retro art direction and design work, and Jonathan Lane’s equally wonderful cover art. Plus, there are stickers!)

Honestly, listening to Good Times! again and again and again, I am realizing that I’m still that kid sitting in front of the television set ensconced in the latest adventures of the fun foursome known as Micky, Peter, Mike and Davy. With this fantastic album, it’s Monkeemania, and really good times, again and forevermore.

2 thoughts on “No Monkeeing Around, These are Good Times! for Monkees Fans”