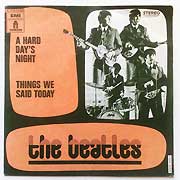 Tonight’s all-new edition of the weekly Beatles roundtable, Things We Said Today, is another can’t-miss get-together.

Beginning at 8 pm ET, our panel of Beatles experts–Ken Michaels, Steve Marinucci, Al Sussman, and Allan Kozinn–are joined by author Kit O’Toole (the popular Deep Beatles column on the Something Else website, and the book Songs We Were Singing: Guided Tours through the Beatles’ Lesser-Known Tracks) to talk about the 30th anniversary of the release of Paul McCartney’s album Press to Play on September 1, 1986.

Also up for discussion is the 50th anniversary of the Beatles’ final concert, held at Candlestick Park in San Francisco, and a concert appearance by the Claypool Lennon Delirium; Ken was there and he has an on-the-spot report.

Tune in at 8 pm ET tonight for show 198 of the premiere Beatles talk show, Things We Said Today. Pure Pop Radio has your Beatles interests covered.