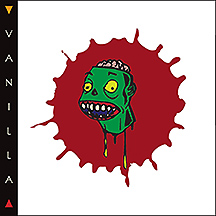 A monkey, a horn section, and a temper tantrum waiting to happen walk into a bar… It sounds like the start of one of those stale jokes that pours through a drinking establishment where equally stale pretzels and drunken callouts for another round of on-tap fill-‘er-ups power through the late, pre-last-call hours, but it’s just another of my catchy headline hustles that set the stage for an exclusive look at the latest musical missive from Tacoma, Washington’s favorite magical, musical sons, the men of Vanilla.

“Don’t Lose Your Temper,” a propulsive, horn-fueled, fast paced, four-on-the-floor romp laced with ska stripes, punchy, Brian Setzer-y guitar runs, and a tasty, plugged-into-the-wall side of King Curtis-like saxophone madness, is the latest entry into the pot of songs that will comprise Vanilla’s next album, Mystik Nights of Takoma. It’s a dazzling doozy of a thing.

And, it’s monkey-fied. Why, it’s monkey-riffic! Seems Elvis Presley, the forever king of rock ‘n’ roll, had a pet chimpanzee named Scatter, whose story is one of those you-can’t-make-this-s**t-up rock ‘n’ roll humdingers (the Animal Planet cable channel has the tale of this rather rambunctious pet, which you can read here). Jayson Jarmon’s song says “Hey!” to Scatter in an anonymous nod in the bridge. It’s all about the details, folks.

You know the point at which a situation comes to a boil right in your face, up close and perilously personal, and you feel like you’re going to blow all over the joint like Mount Vesuvius? “Don’t Lose Your Temper” is about just that sort of moment, about the very second where it’s nothing less than now or never (love you, Elvis!). It’s that very moment where you get the chance to cool down and walk away. It’s that moment of salvation that’s always the better choice. It’s your ticket to thank-God-I-didn’t-punch-that-guy-in-the-kisser, Three Stooges-style.

With a swinging lead vocal from Sean Gaffney, whose guitar and bass lines shine, and chorus warbling from Jayson and Gavin Guss, drum pizazz from Dana Sims, and the Cliff Colon Trio, whose piercing horns take no prisoners, “Don’t Lose Your Temper” is another feather in the cap of the Vanilla collective.

Where to Get It: Beginning Friday, 9/30 on Vanilla’s Bandcamp page

2 thoughts on “A Monkey, a Horn Section, and a Temper Tantrum Walk Into a Bar…”