Folding into their classic and melodic sound a deep well’s worth of influences and making good on an unspoken pledge to surprise both themselves and their listeners with gonzo song construction that makes everything they record pop like fireworks, Dowling and Poole remain fearless creators whose music is stimulating and, above all, fun. Their three most recent EPs follow along on this most alluring path.

Just seven months after One Hyde Park proved conclusively that there were no limits to their boundless creativity, the dynamic duo returned with the first of three consecutive EPs, extending the hitting streak that has resulted in such a strong and assured run of releases. 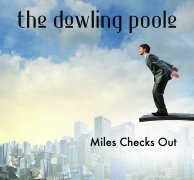 All three EPs feature one new track and two acoustic recordings of favorite songs recorded live in 2015 in Manchester, England. The first release features the brand-new “Miles Checks Out,” a typically clever and catchy number mixing, in the accepted Dowling Poole style, allusions to James Bond theme songs, prog, straight-ahead pop, and varying time signatures–the kind of patchwork quilt that the solo Roy Wood probably wouldn’t mind calling his own. In tow are live, glorious, acoustic versions of “Saving It All for a Saturday” and “Getting a License,” both originally heard on Bleak Strategies.

The second EP, released at the end of last November, puts another wildly imaginative number front and center: “Bright Spark,” a bopper of an upbeat workout that is perhaps the most straight-ahead structure-wise of the three new songs, but no less inventive and catchy. Live, acoustic versions of “The Sun is Mine” and “Where the Memories Fester,” both also originally from Bleak Strategies, complete the lineup.

Willie Dowling and Jon Poole function as the prime movers in the Dowling Poole as two halves of the same creative brain. They can always be counted on to conjure up a joyous array of songs that incorporate varying styles and provide a great listening experience for their listeners. This is the stuff of legend–what a joy it is to write about and play on the radio the work of the Dowling Poole.

Where to Get Them: 369 Music on Bandcamp