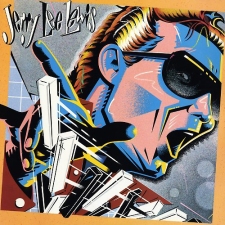 It’s one of those records that just sounds right. It’s 1979, and Jerry Lee Lewis, with Bones Howe in the producer’s chair, is working his sweaty way through a Mack Vickery romp, banging mercilessly on the keys, a-thump-thump-thumpin’ until his fingers are sore, singing some perfunctory lyrics and assumedly ad-libbing some choice look-at-me-why-dontcha cracks in a kind of wink-of-an- eye way, all for the benefit of platter spinners and air 88s players everywhere.

When I was working country radio back in 1979, “Rockin’ My Life Away” was a favorite record to spin, even when it wasn’t coming up in the daily rotation. I would cue up the Killer’s self-titled Elektra album and, usually out of a station jingle that ended cold, baby, let ‘er rip. I would pretend to be Jerry Lee, beating my fingertips sore, banging my fingers on top of the console, making believe it was me doing those insane piano runs. One of the ad salesmen at the station was a big fan of that record; he would stand outside of the studio and watch me through the glass, a big smile planted on his kisser. And I felt obliged to perform in my own Killer-lite way.

“Rockin’ My Life Away” is a fun number, even if it’s just a sketch of a tune–a basic framework, if you will, of a rock and roll workout, which is all Jerry Lee needs to bend and twist it to suit his purpose, which is to let loose with wild fills that mark his territory. So, he gets to doing the deed, at 1:03 when he sings “Watch me now” and goes off on his way; at 2:10, after warning the band (“Look out now…”); and at 3:00 (“I’ve gotta have one more time! Yeah!”). Look out black keys and the white ones too, he seems to be saying. Here I come!

Along the way, as he makes not-nice with his piano, he makes a play for longevity (“My name is Jerry Lee Lewis and I’m durned sure here to stay”), states the obvious (“She knows how to roll, the Killer knows how to rock”), and, once again, tells you what you should already know (“The Killer’s top class”). Jerry Lee had earned his stripes long before 1979, of course, and earned his shot at celebrating his stature here.

“Rockin’ My Life Away” is an exciting performance that rocks and rolls like a runaway train daring the tracks to keep him on the straight and narrow. It’s over in a breathless three minutes and 27 seconds and it’s chock full of Killer-esque pomp and swagger. It’s also one of those songs the Internet lyric sites have a whole lotta trouble with, but never you mind. Jerry Lee’s just bein’ Jerry Lee, if that helps.