A very special Pure Pop Radio: In Conversation two-fer featuring top popsters from yesterday and today, and two all-new editions of the Alan Haber’s Pop Tunes Deejay Show hit the Pop that Goes Crunch Radio airwaves this week. It is, indeed, a week to remember.

Star Time on Pure Pop Radio: In Conversation
On Wednesday night at 8:30 pm ET (special time), a very special Pure Pop Radio: In Conversation two-fer kicks off with the one and only Zeek Weekling behind the virtual microphone, talking about the Weeklings’ Fab new take on the Beatles’ “Paperback Writer.” Fans will not be surprised in the least that the venerable Beatles track has been Weekling-ized in the band’s usual, knowing way. Zeek also talks about the band’s upcoming releases (yes, releases); you won’t want to miss a second of this Weeklings-centric conversation. 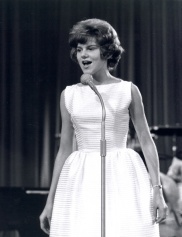 Immediately following on Wednesday night at 9 pm ET, Peggy March, formerly known as Little Peggy March, joins me for a tour through her long running career, which began back in 1963 with her hit recording of “I Will Follow Him,” a decades-old staple of oldies radio. We’ll talk about that chestnut, and about the top-flight, recently-released compilation on Ace Records of Peggy’s recordings, If You Loved Me: RCA Recordings from Around the World 1963-1969. Did you know that Peggy recorded a very early Randy Newman song, and a cover of a Mike Love-Brian Wilson number? We’ve got all the details during this lively program, including a Beatles-related story you won’t want to miss. (Both shows repeat Saturday, starting at 2 pm ET)

Pop Tunes returns on Thursday night at 8 pm ET with an as-yet-not-mixed-together-but-you-know-it’s-going-to-pop-large program featuring the greatest pop in the universe from across the decades. Details to follow. (Repeats Monday, September 11 at 11 am ET)

Don’t forget to check the Notes section of the Pop Tunes Deejay Show page on Facebook for the latest show playlists. Click here to be magically transported.