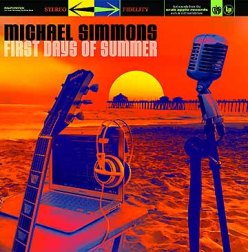 You will likely know musician and high school educator Michael Simmons from the much-missed sparkle*jets u.k., from Yorktown Lads, whose Cameron Lew makes quite fine music on his own, or Popdudes, a musical conclave that counts journalist and drummer John Borack among its ranks. Now, it’s time to know Simmons as a solo artist who has produced a terrific long player that will stand, when all of this year’s dust has settled, as one of the best of the year.

First Days of Summer, the music of which was recorded from 2015 to 2017 in sparkling Kitchen-o-Phonic sound, reflecting the location of Simmons’ studio, is contained inside a striking cover bathed in a fiery orange wash with tools of the musician’s trade on the front and song lyrics and credits on the back. This is a stylistically diverse collection of songs that expertly lays out the artist’s diverse musical vision and dedication to craft.

The opening and closing tracks are near-perfect, soft-pop bookends: “Do Your Best to Care,” a keyboard driven toe-tapper featuring a determined, jazzy electric guitar solo, and the sleepy, closing ballad “Center of the Spiral,” which ends as if a turntable’s needle has become comfortably stuck in a loop within a record’s runoff wax, together form a comfortable wrapper within which sit First Days of Summer’s other songs.

Inside this wrapper, you’ll find a variety of catchy sounds, such as the mid-tempo pop-rocker “Fuzzy Green Hat,” steeped in a decidedly Something/Anything?-era Todd Rundgren vibe and all about creative inspiration, no matter where it may come from. The jangly, Andy Partridge-esque bopper “No More Girls” concerns itself with growing up where love is concerned (“I can’t sing about girls no more/No more girls for me/No more songs about girls for sure/A woman’s more my speed/And I know what I will do/I’m gonna sing about you”). “Bucket List,” on fire with a whole lot of Rockpile and NRBQ bluster, celebrates the embracing of true love.

And there’s more. “Let’s Fall in Love” is a lively, beat-driven, Prince-inspired slice of dance pop about second chance romance. The title track, a dreamy, breezy number,  recalls the best of Jeffrey Foskett with a pinch of Burt Bacharach horn embellishment and a wash of Todd Rundgren balladry. It’s sublime.

What shines brightly and decisively from within the dozen tracks on First Days of Summer is the passion that Michael Simmons has for making and playing music (he played most of the instruments on this album). He would do well to keep at this music thing and start planning his next collection with due haste. The sound you hear in the distance is listeners wanting a followup.

Where to Get It: Release date is TBD; check Michael Simmons’ Bandcamp page for the latest information

A joyous, jazzy-by-way-of-Paul-McCartney-esque song from David’s upcoming Lucky Day album, set for a May 18 release, “Room to Grow” was written in Nashville with Pure Pop Radio favorite Bill DeMain. It’s the kind of song that would be equally at home in an intimate club and your own music room. David’s vocal is smooth and emotive, the instrumentation bounces along to the bopping beat, and clever touches like the luscious bridge, lively background vocal arrangement and nimble Stevie Wonder-like harmonica break will put a smile on your face. Now playing on episodes of Alan Haber’s Pop Tunes Deejay Show. A catchy, delectable triumph.

Where to Get It: Lucky Day will be released by Lojinx on May 18

Speaking of diverse musical vision and dedication to craft, Milan, Italy’s Radio Days have, save for one track, stepped outside of their power pop comfort zone to deliver a four-song EP full of wonder. It is after the hard hitting, pounding opener “Time is Over” that the group starts serving up surprises. The beautiful “Sometimes,” a slow-paced ballad bolstered by lovely, close harmonies, is followed by a clever reinvention of the Ramones’ “I Wanna Be Your Boyfriend,” recast here as a sensitive ballad adorned with Radio Days’ trademark vocal prowess. The title track, a Dick Dale-meets-just-about-any-’60s-surf-band-you-could-name mid-paced workout, roughly translates, according to Google, as “The Dolphin and the Monitor,” but you’ll probably be happy going with “Cool Instro.” Great stuff.