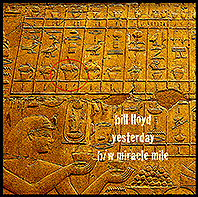 With today’s release of his fantastic new single, the master musical magician Bill Lloyd once again aims for the stars and far surpasses them.

The double A-side spinner, pairing two tremendous and powerful melodic pop songs, “Yesterday” and “Miracle Mile,” is fine and dandy all on its own as a download from iTunes, and you should spring for it immediately if not sooner, but the limited edition CD comes with three extra tracks that quite simply can not be denied, making this collection an EP that raises the bar and then some. So it’s both of these things for you, and you too.

Coming off last year’s grand reimagining of his classic 1994 album, Set to Pop (entitled Reset2014) and the typically astounding 2012 record Boy King of Tokyo, Lloyd has raised the bar even higher, playing the one-man-band with two of his best-ever songs. A-side number one, “Yesterday,” is a straight-ahead power pop number with an oh-so-catchy melody and lots of oomph in the form of lyrical electric guitars; inventive, rollercoaster bass lines (performed by special guest star and co-writer, Cheap Trick’s Tom Petersson), and just generally smart and inspired songwriting.

Over on A-side number two, “Miracle Mile,” it’s a Who-like opening (think Bill, not Keith, Moon on drums) that slides into a mid-tempo charmer that sneaks up on you and quickly grabs you by the throat as the drums and vocals kick defiantly with purpose. The song was co-written by frequent musical cohort Pat Buchanan, whose band Idle Jets released the classic 1999 album, Atomic Fireball.

Two of the three bonus tracks appearing on the CD-EP were fashioned back in the early 2000s in Lloyd’s home studio and are corkers, all (“Frank” was recorded in 1998). Following a slick backwards section that’s thrown a loop when the sound of a needle draws across a slab of vinyl, “Frank” gets down to the business of an uptempo pop song with another great melody. “It’s Happening Now” is a lovely acoustic number with an equally lovely melody and a sensitive, understated background vocal arrangement. It would sound all warm and snugly played directly after Paul McCartney’s “Put It There.”

The mindblower among these bonus tracks–the slambang, whizbang, tree shaking, volcano erupting, hell of a thing is the 11 minute instrumental stew called “Today’s Soundtrack,” which could very well be the last word on instrumentals if it’s last words you’re looking for. Stitching together seven distinct pieces, the titles of which are worth the price of admission alone, Lloyd has struck instrumental gold.

To wit: “Gothish” feeds into “Mr. Haney Flips His Wig,” which feeds into “Slinkette,” which becomes “Beautiful Creeps,” which ushers in “Clubbing” and follows with “Let It Come to You” and “40 Watts.” All in all, this is a collective, surprising trip down the Route 66 of the musical mind, a ride with tantalizing twists and turns whose passengers are a short, opening mood poem; a scratchy, early rock and roll workout coming out of the tiny speaker of a transistor radio sitting on Oliver Douglas’s kitchen table in Green Acres; a tiny snippet of electronic sound that plays like it was orphaned after being cut from Todd Rundgren’s A Wizard, A True Star track, “Dogfight Giggle”; a slow burning, blues-cum-jazz tone poem; an energetic dance, club workout; a Prince-styled, funky guitar-centric attack; and a relatively straight-ahead pop rocking bed for what would undoubtedly be a big hit song. It’s a wild, stylish, way-satisfying ride–a perhaps unexpected one that, frankly, sizzles.

Lloyd has always been a reliable creator, issuing record after record of top-flight songs played and sung to perfection. With this new release, he has reached new heights, turning in a pair of phenomenal recordings supported, on the CD-EP, by three additional tracks that beg the question, “What other treasures are lurking in the cupboards in Bill’s home studio?”.

For now, these are the treasures, all of which are now playing in rotation on Pure Pop Radio. This is one of the great releases of the year. You know what to do.