We shouted it from the rooftops throughout 2013, and now it’s come true: Drink a Toast to Innocence: A Tribute to Lite Rock has been showered with huzzahs from seven music critics, websites and a rockin’ National Public Radio affiliate down in sunny Florida. And we’re going to celebrate all next week on Pure Pop Radio: In Conversation with six days of in-depth interviews with the compilation’s executive producer, Andrew Curry, and nine of the artists who contributed tracks. All told, these interviews constitute the bible on one of the best various artist collections to be released last year or any other year.

Beginning Monday, January 20, and ending on Saturday, January 25, Alan Haber will be talking to Andrew and the incredibly talented group of artists that contributed to Drink a Toast to Innocence. On Monday and Wednesday nights, and on Friday afternoon, Andrew steps up to the microphone and takes you from the idea’s inception to the compilation’s release. Everything you’ve wanted to know about this landmark record will be communicated during this hour and 45 minute-long chat that features tracks from the album. And then Tuesday, Thursday and Saturday,  it’s the artists’ turn to talk about the tracks they tackled, taking you from choosing the songs to recording them and beyond. We’re writing the audio book on Drink a Toast to Innocence, dear music fans, and you can only hear it on Pure Pop Radio: In Conversation.

Here’s the on-air schedule for this exciting group of interviews:

– Tuesday, January 21, 8 pm ET: Michael Carpenter talks about “We Don’t Talk Anymore,” Kelly Jones talks about “I’d Really Love to See You Tonight,” and Brandon Schott talks about “Thank You for Being a Friend”

– Thursday, January 23, 8 pm ET: Lannie Flowers talks about “Dance With Me,” Wyatt Funderburk talks about “Bluer than Blue,” and Linus of Hollywood talks about “More than I Can Say”

– Saturday, January 25, 6 pm ET: Christian Phillips (The Sonic Executive Sessions) talks about “On and On,” Scott Klass (The Davenports) talks about “Just When I Needed You Most,” and Willie Wisely talks about “So Into You”

Don’t miss this exciting event! Jot down the dates and times and immerse yourself in an unprecedented group of interviews with pop’s greatest artists and the man of the hour,  Executive Producer and Lite-rock Impresario Andrew Curry! 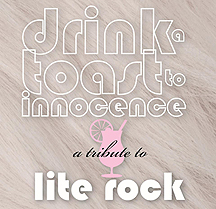