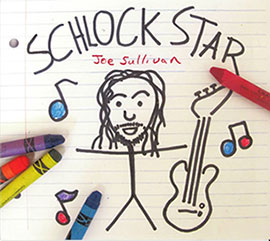 If this were another time and place and Sullivanmania had hit our shores in 1964, it would have been Joe striking a rock star pose on the stage of the Ed Sullivan Theater with the legend “Sorry Girls, He’s Married!” jittering lazily at the bottom of our television screens. The idol of millions, a musical matinee bon vivant, and a consummate rock ‘n’ roll craftsman? “Surely such a creature does not exist!” the ubiquitous they would have screamed, hands flailing around their heads. The whole package. The goods.

In today’s world of momentary chart toppers and web site photo bombs, Joe Sullivan emerges upon first listen as the real deal. Don’t let the tongue-in-cheek album title and cover fool you. A portrait of the artist as an animated object, rendered in permanent marker and surrounded by an under-strung guitar and crayons used to color in a couple-plus-three musical notes, adorns the canvas, suggesting that the music inside might have been written and performed for a Saturday morning kids show in Tuscaloosa or a traveling ice show with skating bears and tree trunks. Nothing could be further from the truth, for this is pop and rock music created by an adult for other adults, and adults who are kids at heart. And it hints, every so cautiously, at the humor and pathos contained within. And, of course, the talent. So much talent.

Sullivan, who plays in the live shows of sterling musical conclave An American Underdog, considers himself to be a songwriter that plays guitar, as opposed to a guitar player who writes songs. His craft benefits from his exposure to a “huge collection of records” from the fifties and sixties he had access to in his youth. His life experience turns those sounds on their heads for a contemporary musical knockout punch you won’t soon forget.

This is absolutely the stuff of a legend who rolls out his barrels beginning with song number one, the hooky “Conspiracy Radio,” armed with an opening salvo in the form of an affectionate nod to the Ronettes’ “Be My Baby.” A slightly agitated roll on that song’s opening drum beats raises the flag and spreads the word about the wonderful, still-vital world of radio. With a sweet Ramones glaze and Brian May-like guitar solo, Sullivan pleads with people to be overtaken by the power that finds him “hanging on every word.” “Haven’t you heard?” Sullivan wonders, and you know you have as you’re reaching for a dial to turn to your favorite station rocking your favorite tunes. 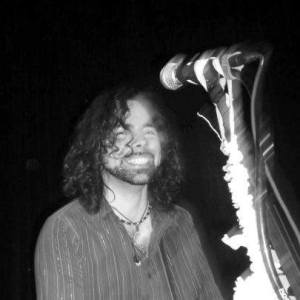 If there is a recurring theme within Schlock Star, it’s the plight of girls and boys of various stripes. A powerful portrait of the artist as rock star pulling the rug out from under a girl who thinks her boyfriend is “insane” and plays music that’s “kind of lame” is at the center of the tongue-in-cheek “Rock Star Boyfriend.” “She don’t care,” the narrator sings, perhaps matter-of-factly. The heck with cool tunes: it’s all about guitar shredding and posing for shiny web site splash pages for this girl. In “Girl Next Door,” a guy, with his heart presumably in the right place, trains his telescope on the bedroom of a new next door neighbor from parts unknown. It’s really a sweet story, as the narrator sings: “I’ll be her Gilligan, she’ll be my Mary Ann, she’ll be my Lois Lane, I’ll be her Superman.” And in the bluesy guitar crunch of “Love in Every Bite,” the emotion is all-consuming and flavorful, and in every way just as tasty.

Aided more than ably by producer, engineer and multi-instrumentalist Andy Reed and drummers Donny Brown and Cody Maracek, Sullivan makes tracks that stick and stack up for imminent replay. You can tell the whole bunch of these crackerjack musical minds are having a blast. The explosions are infectious and more than that you can not ask for. This is Sullivanmania, attended by screaming fans who dig the sounds of one of the best records of 2014.

This is the whole package. These are the goods. This is Joe Sullivan, and he is the real deal.

Win a factory-sealed copy of Joe Sullivan’s Schlock Star! Simply fill in the form below, making sure to put “Joe Sullivan rocks!” in the Comment field. Only one entry per person. Deadline for entering is 12 noon ET on Wednesday, September 10. Good luck!