A review, by Alan Haber

With his first, self-titled record in 2011, Graham Alexander hit the bricks as the real deal right out of the gate, swinging for the fences with his finely-honed pop sense, great songwriting and performing skills. To up the baseball metaphor, he’s not just swinging for the fences on his sophomore record, Repeat Deceiver–he’s swinging past the fences. He’s upped his game considerably for a powerful pop and roll tour de force that dazzles every step of the way.

Everything is somehow different this time around. The fresh-faced Alexander, shown t-shirted and Beatle coiffed on the cover of his first album, looks, four years on, more serious, determined and, above all, more confident. And it shows: A more soulful pop and rock stance is in place. Real strings and horns shine in the mix, and Alexander’s voice is stronger, showing more range and, at times, a bit of a rasp as he reaches for the top of his register. The new songs are performed with gusto. Swinging past the fences, Alexander the performer is poised to wake up some neighbors.

The slam-bang attack of the title track, a propulsive, catchy number, is propelled by a herky-jerky, four-on-the-floor beat. It  makes for an exciting listening experience. The singer’s vocal is sharp, the melody purposeful and instantly memorable. That the song has a deep hook is a given. We’re talking about Graham Alexander, after all. This is a great way to open the album, and it only gets better from here. 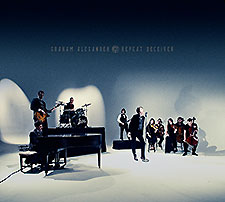 There is a strong sense of soulfulness throughout these songs. For proof, look no further than the album’s second tune, “Romeo Blue,” striped with layers of Motown and Stax goodness and a copious dash of Memphis guitar licks and poppy background vocal stabs. “Games” opens with a luscious, orchestrated entree, punctuated by jazzy guitar lines and driven by Alexander’s emotional vocal. Once the drums kick in, all bets are off and the singer is off to the races, with another Stax-fueled performance that oozes a particularly romantic musical notion. Do I detect a bit of an Elton John influence here? I do.

Singing above a seductive, soulful riff and a weighty horn section, Alexander takes charge as the emotional dance-pop of “She’s a Chameleon” plays. The gorgeous ballad, “Two Ships Passing in the Night,” matches its lovely melody and vocal performance with an equally arresting string part. The soul-stomper “Third Wheel” follows, which sports perhaps the singer’s most elastic vocal of the set. A great horn chart and more string goodness top the proceedings.

The final three songs on this record are perhaps the poppiest and closest to the spirit of Alexander’s debut. The singer delivers the enticing melody of “People are Only Sorry When They’re Caught” as the marching beat provides a steady foundation. The wonderfully named “Total Cartography” is surely a hit single in the making, one that announces itself as an instant favorite as it bursts at the seams with pop goodness. The energetic dah-dah-dah background vocals are delicious, and the cold ending is correct and really satisfying. Alexander’s vocal is all over the closer, “Wait in the Rain,” which quickly trades its swampy opening for an inventive pop sensibility with great chord changes, a tasty guitar solo and a winsome middle eight. It’s a veritable invite for radio to spin it, over and over again.

Which can be said for all of the songs here. Alexander is only two albums into his career and look what’s already come to pass–twenty terrific songs between two long players that really provide only a hint of what this artist can deliver. There is really no limit. That we all are able to witness and experience his mastery is a gift from heaven, a sweet reminder of how great music can change the world. A home run? This one is way out of the park.