For your wonderful Wednesday, we’ve got a short and sweet, but no less wild and wooly stack of wax–a triumphant trio of platters that matter!–to roll out to your ears. Without any further ado, let’s get to it! 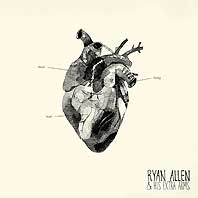 Ryan Allen and His Extra Arms | Heart String Soul With this exhilarating followup to 2011’s Ryan Allen and His Extra Arms, Ryan and his arms prove that they’re no longer the best kept secret in power pop. Heart String Soul has enough oomph and pomp and confidence to blow the doors off your grandma’s shack in the woods. It’s a heck of a record and a heck of an achievement and, heck, we’ll just have to add six great tracks to the Pure Pop Radio playlist, including the pure pop confection “Keep Me Around,” the blistering power pop anthem “Looking Forward to Looking Back,” and the made-for radio, straight-ahead pop of “Should Be Me.” Also now playing in rotation: “Born Radical,” “Not Hanging Out,” and the sensitive ballad that closes the album, “Bonded by Blood.” Destined to be a favorite with many a pop fan, Heart String Soul drops March 25. It’s pretty great.

Jonathan Rundman | Jonathan Rundman Just last Wednesday, we added tracks from Jonathan Rundman’s new album, Look Up. Here we are again with tracks from Jonathan’s 2011 self-titled release, a compilation of various tracks recorded between 2000 and 2010. A few are remixed from earlier album appearances and a few are previously unreleased, but most will be familiar to Rundmaniacs (to coin a phrase). All told, the 20 songs included here kind of sum up the various forms of pop out there in the world today. Rundman’s a master craftsman, for sure. We’ve added 10 tunes: “Smart Girls,” “Librarian,” “Surgical Precision,” “581,” “I Thought You Were Mine,” the sorta-kinda absurdity-meets-tenderness vibe of “Dialysis Carpool,” “Kuortane,” “The Serious Kind,” “You Never Last Where You Land,” and “If You Have a Question.” Fine work from a mighty fine pop purveyor. Dig this now.

As we said above, short and sweet, but no less grand. Be back here tomorrow for more new adds to the Pure Pop Radio playlist.