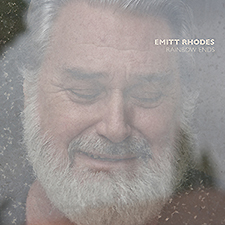 Only 11 days to go until the release of Emitt Rhodes’ first album in 43 years: Rainbow Ends joins the pop craftsman’s peerless catalog on February 26, courtesy of Omnivore Records, in both CD and vinyl formats. 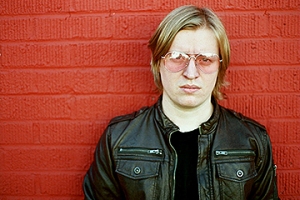 To get you ready for the February 26 release of Rainbow Ends, producer Chris Price joins Alan Haber tomorrow night, February 16, at 8 pm ET (5 pm PT) on Pure Pop Radio: In Conversation for an extensive, in-depth look at the album. (Alan was among the first critics to review Rainbow Ends. If you missed the review, click here to read it.) During the interview, Chris takes listeners on a tour of his magical time with Emitt, from the friends’ initial meeting in 2006 to Chris’s production of what may well rank as fans’ favorite Rhodes recording.

Rainbow Ends, tracks from which we are now proudly playing in rotation on Pure Pop Radio, brings the pop classicist back into the spotlight with terrific songs so good they could only have come from this master of the pop form. Supporting Emitt on this album is a band stocked deep with top-flight musicians, many, if not most, familiar names to pop fans: Jellyfish’s Roger Joseph Manning, Jr., Jason Falkner, Fernando Perdomo, the Bangles’ Susanna Hoffs, Bleu and many more. During the interview, you’ll hear three songs from Rainbow Ends, and Emitt’s cover of a favorite Bee Gees song, “How Can You Mend a  Broken Heart,” which was first released as a limited edition vinyl 45 for Record Store Day 2014 and subsequently included on a Bee Gees tribute album.

Pure Pop Radio is your home for this exciting salute to Emitt Rhodes, leading up to the long-awaited release of Rainbow Ends on February 26. To celebrate, in addition to airing Alan’s extended interview with producer Chris Price tomorrow night, February 16, we’ve added to our playlist the lion’s share of tracks from all of Emitt’s albums, including Rainbow Ends. We’ve also added the bulk of tracks appearing on the Merry-Go-Round’s Listen, Listen: The Definitive Collection. All of these tracks, and more, are now playing in rotation on our air.

In the meantime, why not click on one of the listen links below so you can enjoy our continuous, original 24-hour stream of the greatest melodic pop in the universe? Enjoy!