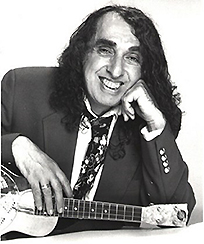 Join us next Tuesday and Wednesday nights on Pure Pop Radio: In Conversation for a festive and wide-ranging celebration of one of the most passionate pop culture performers ever to grace the world stage. Come along with Alan Haber and his guests as they tip-toe through Tiny Tim’s America and discover a world defined by some of the great songs of the early 20th century.

Herbert Khaury, better known as Tiny Tim, may best be remembered by people of a certain age for two milestones: He married Miss Vicki on The Tonight Show Starring Johnny Carson on December 17, 1969–in front of an audience of somewhere in the neighborhood of 40 million viewers–and hit big with his top 20 recording of “Tip-toe Thru’ the Tulips with Me” in 1968.

Fact is, Tiny Tim was more than a curiosity–more than just a guy with long hair and an aversion to germs who appeared on Howard Stern’s radio show to talk about his love of cleaning products and other such eccentricities. Tiny was a human jukebox, able to play, on his always-at-hand ukelele, a seemingly unlimited number of songs from the early 20th century and beyond. Tiny was a passionate performer, devoted to keeping the songs he knew in his heart alive.

Next week’s two-night Tiny Tim spectacular on Pure Pop Radio: In Conversation is a must-listen for fans of Mr. Tim and music lovers who enjoy beautifully written and performed tunes from the various golden eras of song. 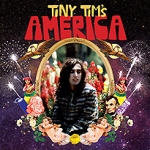 On Tuesday night, September 13 at a special time–9 pm ET, Alan is joined by musician Richard Barone and Mr. Tim biographer Justin Martell for an in-depth look at Tiny Tim’s America, a recent vinyl release of a recording Tiny made in a New York City hotel room back in 1974. Richard teamed up with Tiny’s pianist and arranger cousin, Eddie Rabin, to flesh out the original recording with new instrumentation. The result is a marvelous, totally enjoyable tour of a selection of turn-of-the-century songs as only Mr. Tim could deliver. You’ll hear a few selections from this highly enjoyable, and collectible, release. 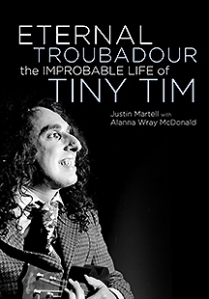 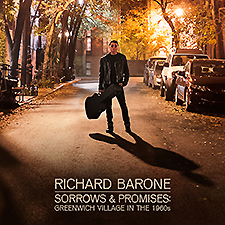 Justin Martell is the author of the exhaustive biography, Eternal Troubadour: The Improbable Life of Tiny Tim. Richard Barone has a long history working with and bringing to market the recordings of Mr. Tim; he has steered the voyage of his group, The Bongos, and produced a rich solo discography; Richard’s latest album, the glorious Sorrows & Promises: Greenwich Village in the 1960s, will be released in October.

Steve talks about The Complete Singles Collection from a producer’s and record company standpoint; Kristian, who is a Tiny Tim expert, talks about his passionate liner notes and Mr. Tim’s technicolor history. You’ll hear a selection of songs from this terrific release.

Both of these special In Conversation shows must rank as two of the most entertaining broadcast in a very long time. Don’t miss Richard Barone and Justin Martell talking about Tiny Tim’s America on Tuesday, September 13 at a special time–9 pm ET–and Steve Stanley and Kristian Hoffman talking about Now Sounds’ Tiny Tim: The Complete Singles Collection (1966-1970) on Wednesday, September 14, at 8 pm ET. A splendid Tiny Tim-eriffic time is guaranteed for all.