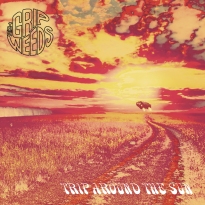 Either the members of the Grip Weeds are, to coin a phrase, cautiously rambunctious or they’re settling into a new, more connected mindset. And by connected, I mean tugging liberally on yesterday’s signposts at the same time as they’re poised to swim contentedly in contemporary musical waters.

Your guess is as good as mine, I guess, but whichever direction you’re leaning, you will have to admit that this well-oiled quartet is firing on all cylinders with a pulsating set of songs that generally and simultaneously beat with a sixties heart and a contemporary pulse.

The Grip Weeds–Kurt Reil, Kristin Pinell Reil, Rick Reil, and Dave DeSantis, top-flight instrumentalists all–have been keeping busy; they released their previous album, How I Won The War, in 2015, and Force of Nature: Live In NYC, a concert DVD, last year. And they crafted this latest collection of songs at their home base, House of Vibes, the studio they operate in Highland Park, New Jersey. For the dozen songs they’ve chosen to populate Trip Around the Sun with, they have upped the level of urgency normally associated with their work. In other words, business as usual, with a bit more zing.

In the well-appointed, melody-drenched opener, “Vibrations,” the stage is set with a mix of chiming guitars and rich harmony parts. Not for the first time on this album, I felt as though I were listening to Free Design vocalizing decades after that group’s 1960s and 1970s heyday. The effect that the Grip Weeds have achieved with this song alone is hall-of-fame worthy.

So it should hardly come as a surprise to listeners that the band’s deft weaving together of yesterday’s musical signposts and today’s contemporary approaches continue throughout these songs. Take the poppy “After the Sunrise,” for example, which slides from tender acoustic to more upbeat electric guitar stances so expertly, with a lovely melody and sweet harmonies in tow.

The muscular “Truth Behind the Lie,” an old song now finally recorded, ups the ante, past the winning Free Design vocal harmony approach, with a fluid, rubbery, John Entwistle-y bass line and an infectious Who-meets-Byrds vibe (there is no mistaking the Roger McGuinn-like solo a little more than halfway through). To my mind, this is Trip Around the Sun’s best slice of madness.

The rocking, energetic to a fault “Casual Observer (To a Crime),” sung by multi-instrumentalist Reil, his voice pinning in the red, explodes with a get-out-of-its-way electric guitar solo and, unusual for a Grip Weeds record, a blazing horn section (Vincent Troyani on tenor sax, Jim Bell on trumpet, and Tom Rosenthal on bari sax). And I haven’t even mentioned the surprising marching band intro…well, I guess I just did.

The whole pop-rocking ball of wax rolls into the exhaustive closer, the six-minute-long title track, which states its introductory case firmly opened in widescreen, Who territory and concludes with all instruments and vocals blazing and coming together in an impassioned burst of emotion.

All of the songs on Trip Around the Sun are, in fact, impassioned bursts of emotion. This will come as no surprise to the Grip Weeds faithful; to everyone else, this will come as a revelation. What a welcome burst of energetic joy this album brings!

Where to Get It: The Grip Weeds’ Trip Around the Sun Store, Amazon
(Release date: October 19)

Alan Haber’s Pure Pop Radio is the premiere website covering the melodic pop scene with in-depth reviews of new and reissued recordings, and a wide variety of features. The 24-hour Pure Pop Radio stream, which ran from 2013 to August 25, 2018, succeeded the weekly Pure Pop Radio show, which began in 1995. Welcome to your number one home for coverage of the greatest melodic pop music in the universe from the ’60s to today.