Cheerful ear worms for a Thursday…

Brain Circus | Brain Circus Smashing collection of impossible-to-resist songs performed in grand style by ace songwriter and keyboard wizard Brian Curtis, late of the much-loved band the Oohs. Thirteen numbers in all, Brain Circus, performed entirely by Curtis, provides ample proof, as if any was needed, that this transplanted Virginian’s ability to craft striking, kenspeckle melodies working in concert with clever chord structures and vocal invention puts him at the top of his game. The gorgeous harmony vocals at the heart of the jangly “If You Only Knew” and the creatively-arranged mid-tempo ballad “Smile is a Thin Disguise” are but two examples of how good this album is, but the majestic, heartfelt love song “Finally Found the One” is the pearl here, a musical sculpture formed with smiles and tears and a whole lot of heart. You’ll detect essence of Beach Boys, Jellyfish and Queen, among other classic touchstones, but this is all Curtis and don’t you forget it.

Now playing in rotation on Pure Pop Radio: “Forget All About It,” “I Don’t Want to Know,” “If You Only Knew,” “Keep My Hands to Yourself,” “Letter Bomb,” “No Secret,” “Smile is a Thing Disguise,” “The Man Who Saw Tomorrow,” and “Try to Ignore Me.” 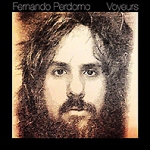 Fernando Perdomo | Voyeurs Los Angeles-based producer to the stars Perdomo stitches together a mix of songs sung and instrumentals played for a singularly immersive listening experience. Seventies-styled, catchy nugget “Stay With the Friends” invites clapping to the beat; the beautiful ballad “The One You Run To” wraps its loving arms around you. Instros “Sunday Afternoon” and “Waltz for Doug” are gorgeous and impeccably performed highlights. Much to admire and hug.

Now playing in rotation on Pure Pop Radio: “Feels,” “Holding Back I Love Yous,” “Stay With the Friends,” “Home,” “Cruiser,” “Sunday Afternoon,” and “Waltz for Doug,” “The One You Run To.”

Chris Bolger | No Promises Recorded in New Jersey and seasoned with top flight performances from an array of special guest stars such as the Smithereens’ super drummer Dennis Diken, Graham Maby (Joe Jackson) and James Mastro (The Bongos), No Promises is a pop fan’s delight–13 catchy, melodic works like the upbeat “Easier,” kicking off with just a hint of the Kinks’ “Picture Book,” and the pop-rock workout “Geraldine.” The saxified rocker “Barbara Feldon,” a tribute to the actress who played Agent 99 on the classic television show Get Smart, is a joyous foot-stomping treat. Produced by Bolger, engineer/mixer Kostadin Kamcev and Diken. Terrific.

Now playing in rotation on Pure Pop Radio: The entire album: “Atlantic City Expressway,” “Barbara Feldon,” “Easier,” “Everything,” “Geraldine,” “Learning to Paint,” “Maybe,” “No Promises,” “She might Look My Way,” “Ships,” “Souls Turn Blue,” “Tear that Cabin Down,” and “What’s it Got to Do With Me.”

Alice Bierhorst | Now Entering Liberty Heights, The Vigil, All Shall Be Revealed, Oxygen New York City native and Pure Pop Radio favorite Bierhorst’s catalog is rich with releases highlighting her vibrant songs that paint lovely soundscapes. Now added to the playlist are songs from four more of the immensely-talented singer-songwriter’s 15 albums (her latest release, The Beacon, has been part of our playlist since this past March).

Now playing in rotation on Pure Pop Radio: From 2000’s Now Entering Liberty Heights: the soulful, bluesy “Legendary Pillow” and the pretty ballad “Lovable.” From 2007’s The Vigil: “I Will Always Love You (When I’m Alone),” the driving “Thank You,” “Come Little Baby,” “Do You Dream” and the title track. From All Shall Be Revealed: the sumptuous, catchy “Airborne,” “Better Angels,” the lovely “Bright at the End of the Day,” “Farther to Go,” “Golden Hours,” the title track and “I Have Always Been Free.” And from Oxygen, “Not the One” and the title track.

Look Park | “Aeroplane” Chris Collingwood’s new group project, which takes its name from the Frank Newhall Look Memorial Park, an actual municipal park in Northampton, Massachusetts, kicked off with this pre-album-release song, a breezy, Fountains of Wayne type of breezy construct. As catchy as any of Collingwood’s Fountains of Wayne songs, it bodes well for the full release, available tomorrow, July 22.