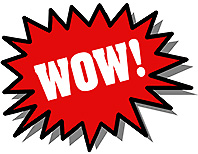 This week has practically flown by! Wasn’t it just Monday…yesterday? Wow! Well, it’s Friday, and that means it’s day five of Pure Pop Radio’s exciting New Music Explosion, which is great news all by itself, but the even greater news is that we’ve got so much new music to add to our playlist that we’ll be exploding next week, too! Look for another great list of newly-added songs and artists next Tuesday or Wednesday. 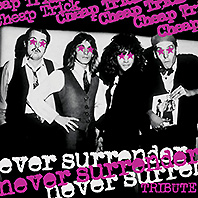 Never Surrender: The Cheap Trick Tribute |  Various Artists We’ve long been big fans of Australia’s Zero Hour Records, a great independent label run by George Matzkou. Zero Hour continually releases great-sounding compilations in smart looking packages that you can hold in your hand and admire as works of art. The latest in a series of tribute albums curated by the label is an exciting two-CD celebration of the songs of Cheap Trick. Never Surrender serves up 40 songs from across the wide-ranging body of work produced over the years by one of the most loved bands of the rock era. All manner of artists deliver their versions of such great songs as “ELO Kiddies,” “Oh Candy,” “”Come On Come On,” and “I Want You to Want Me.”

Naturally, many of pop music’s greatest artists wanted, and probably even needed, to be part of the celebration of some truly great songs; quite a few of these artists are Pure Pop Radio favorites. We’re thrilled to have added to our playlist 16 tracks, each one guaranteed to have you up and running with your favorite imaginary axe, playing air guitar to these venerated classics.

Here’s the rundown: The Cry, “ELO Kiddies”; The Running Jumps, “If You Want My Love”; Chris Richards and the Subtractions, “Downed”; Stephen Lawrenson, “Such a Good Girl”; Lannie Flowers, “Oh Candy”; Spike Priggen and C. P. Roth, “So Good to See You”; Lisa Mychols, “Tonite It’s You”; Bill Lloyd, “Come On Come On”; Corin Ashley, “I Want You to Want Me”; Jeremy, “Takin’ Me Back”; Easterly, “Let Go”; Rob Smith and Danny McCarthy, “Had to Make You Mine”; Rob Bonfiglio, “Taxman Mr. Thief”; The Affections, “Say Goodbye”; honeychain, “I Can’t Take It”; and Michael Carpenter, “Surrender.” Not only is this an eclectic bunch of songs, it’s an electric bunch of artists, joining together to pay tribute to a classic group that has wowed the world’s music fans for so long. We’re proud to be bringing you tracks from this album, in rotation. Good job, Zero Hour! 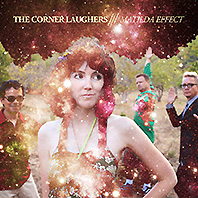 The Corner Laughers | Matilda Effect The award for the most enchanting melodic pop music album released so far this year must, without question, go to the well-appointed members of the Corner Laughers, who have produced a song cycle that sounds bright and cheery, wonderfully enchanting, and lyrically invigorating. From the opening, Motown vibe of “Fairytale Tourist” to the lively pure pop pleasures of the happy, bouncy “Go Fly Your Kite,” Matilda Effect, which releases today, puts a big smile on your face that nary a tissue or wet towel will be able to wipe clean. The reggae-meets-pop vibe of the closer, “Good Hope,” is quite intoxicating and joyous and mighty hard to resist, which you wouldn’t want to do anyway under any circumstances at all. Big hugs to the enchanting Karla Kane, who wrote most of the songs here; Khoi Huynh; KC Bowman; and Charlie Crabtree. Equally big hugs to Allen Clapp, who produced, along with the Laughers. We’ve added all 10 of the songs on this delightful album: “Fairytale Tourist,” “The Girl, America,” “Octavia A,” “Queen of the Meadow,” “Sophie in the Streets of Stockholm,” “Midsommar,” “Lammas Land,” “Go Fly Your Kite,” “Martha (Cincinnati, 1914),” and “Good Hope.” Color us enchanted. 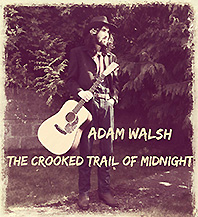 Adam Walsh | The Crooked Trail of Midnight We’ve been playing a host of tracks from this mighty talented singer-songwriter for months. Whether on his own or with his pal Colm Gavin, his talent sparkles and lights the sky. Country, folk and a decidedly keen pop sense permeate everything Adam records. Might we refer to his music as Americana Pop? Perhaps. This EP is a fantastic way to introduce yourself to Adam’s considerable charms as a musician of the highest order. We’re playing, in rotation, “Child of Love,” “Hidden Times,” “Of Our Love,” “Love that’s Gone,” “Steamboat Dream (for John Hartford),” and ” Sun Goes Down.” Great stuff.

But that’s not all. We’re also playing a few other Adam tracks: a cover of the Bee Gees’ “Sun in My Morning,” Gene Clark’s “Here Tonight,”  and Jeff Lynne’s “Can’t Get It Out of My Head,” all three performed with Colm Gavin. Lovely, all. 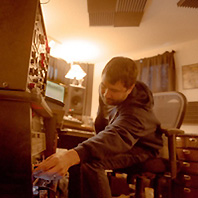 Andy Reed | “Darlin’, You Don’t Know,” “Good Girl,” and “The Show Goes On” Producer, engineer, songwriter, performer, member of the Legal Matters and all-around musical magician Andy Reed’s latest single is another one of his can’t-miss creations that even before the first chorus has been sung burrows into your brain and holes up there for, you know, ever. So, naturally, we’re playing it in rotation on Pure Pop Radio. The two b-sides are remixed versions of songs that appeared on the split EP Andy released with Brandon Schott a little more than a year and a half ago. We love them both. And you will, too.

Thanks for checking in this week and exploring our latest adds to the Pure Pop Radio playlist. Click on one of the listen links below to hear hundreds of new songs and a total of more than 6,800 melodic pop nuggets from the ’60s to today! See you back here next Tuesday or Wednesday for another edition of our New Music Explosion!