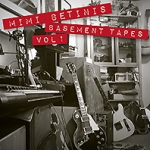 Mimi Betinis | Basement Tapes Vol. 1
A month ago today, I reviewed Mimi’s other 2016 release, Music Sounds, which I determined rather early in the listening was a simply wonderful collection of songs. Now, here is another Betinis collection, composed of tracks that he’s been working on over the years that have now been finished and gathered together all shiny and vibrant in one place. The treasures on offer are full of life: the achingly beautiful ballad, “All that Glitters,” picked acoustically with care, topped by tambourine and electric guitar shading, and featuring instruments from Mimi’s extensive collection, which, he says, give the song “an eerie and dark feel”; “Ray of Light,” a melodic sweetness sounding like an Andy Partridge outtake off of XTC’s Nonsuch album, and simply lovely covers (Paul McCartney’s song for Mary Hopkin, “Goodbye,” and the Hudson Brothers’ “So You Are a Star” are glorious). Saying that some heritage artists are only getting better as time passes by can sound like rather an empty assertion, but my, how that phrase does indeed fit snug as a bug here.

Where to Get It: Available on October 1 at CD Baby. Pre-order now at Pop Music Sounds. 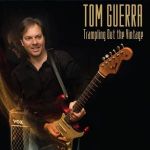 Tom Guerra | Trampling Out the Vintage and All of the Above
Mambo Sons member and a writer, since 1998, for Vintage Guitar magazine, Tom Guerra has been playing live since the late 1970s; he’s been a solo artist since 2014, when he released his first record, All of the Above. His latest album, Trampling Out the Vintage, was released this year; tracks from both long players are now happily spinning on Pure Pop Radio. From the debut, the warm, inviting singalong ballad, “Love Comes to Us All,” is a lovely charmer, and the rocker “Cup of Tea” is a solid toe tapper with a classic riff and a great melody. From Trampling Out the Vintage, “Tell the World” is an obvious, catchy pop single waiting to explode at radio, and the rocking cover of “Make Your Own Kind of Music,” made famous by Mama Cass Elliot, is a prime example of how to pay respect to a classic number and make it your own at the very same time. I hope to be able to add more music from Tom to the Pure Pop Radio playlist in the future.

Now playing in rotation on Pure Pop Radio: From Trampling Out the Vintage: “All Purpose Song,” “Tell the World,” “Hard to Love,” and “Make Your Own Kind of Music.” From All of the Above: “Dirty Son,” “Here’s Tomorrow,” “Cup of Tea,” and “Love Comes to Us All.”

Where to Get Them: Tom’s E-Store, CD Baby, and Amazon. 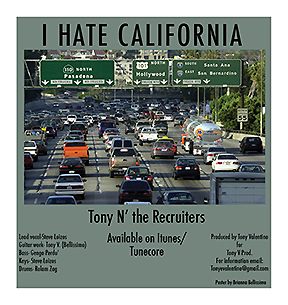 Tony ‘n’ the Recruiters | “I Hate California”
Standells veteran Tony Valentino and crew bemoan the state of life on the left coast with a down and dirty stab of pop and roll, stacked deep with four-on-the-floor emotion and spicy guitar licks. Tony continues to be the man with this latest release, a real corker of a record that makes the airwaves light up at any time of the day or night. Monumental.

Where to Get It: Watch this space.

Scott Carlson’s Frodis Records continues to do the pop community a great service by releasing vinyl-only reissues of important power pop and punk recordings. The label’s latest pearls are separate singles devoted to some essential sounds. 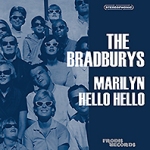 The Bradburys songs, both from the hard-to-find 1999 debut Introducing the Bradburys, are vibrant pop rockers with great hooks. An attractive sleeve and liner notes from the band’s Dan Pavelich, who still turns out great tunes, are key elements of the package (Dan currently draws the wonderful Just Say Uncle comic strip, and writes for the Kenosha News in Wisconsin). 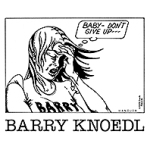 Barry Knoedl’s poppy, catchy single dates back to 1976; it was recorded at the end of a session during which he played bass and was the second release on Jim Antonucci’s Death Records. Thankfully, Scott has rescued this pair of delightful, smile-inducing, pure poppy numbers.

A tip of the Pure Pop Radio hat for the work being done by Scott in rescuing some of pop’s greatest, seemingly-unknown treasures.

Where to Get Them: Frodis Records