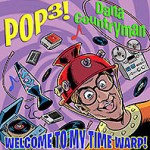 In this typically wide-ranging program, Dana goes behind-the-scenes about his smashing, new album, Pop 3! Welcome to My Time Warp! What goes into making such a wonderful record? How does Dana approach songwriting? How does he record? All of these questions and more will be answered. And you will hear three songs from Pop 3!

Dana also takes listeners through his musical history, from when he first started playing in bands to his years in The Amazing Pink Things, his work with electronic music wizard Jean-Jacques Perrey, and his current, solo career, which has now produced three albums of late-’60s-early ’70s pure pop perfection.

We cap off this delightful program by playing three of the great songs from yesteryear that have influenced Dana: Gilbert O’Sullivan’s “Clair,” Harry Nilsson’s “Me and My Arrow,” and the Carpenters’ “Goodbye to Love.” Dana talks about each of these songs, giving his unique perspective on them.

Don’t miss this chance to spend 90 minutes with one of the masters of retro pop music, Dana Countryman. Set your alarm clocks for tomorrow night, Tuesday, September 22, at a special time: 9 pm ET (6 pm PT). See you on the radio! (Pure Pop Radio: In Conversation is taking a few weeks off. The next new show will be on Tuesday, October 13.)