Pure Pop Radio is proud to present the exclusive, worldwide radio premiere of Pop 4’s “Don’t You Be Like That” tonight, Tuesday, July 14, at 8 pm ET. (The band has created a snazzy Facebook event page about this, on which the above, equally snazzy banner appears; check out the event page by clicking here).

Featuring the considerable talents of Liar’s Club’s Scott McPherson; the great singer and songwriter Andrea Perry; the Corner Laughers’ not-so-secret weapon KC Bowman; and Vanilla’s Kirk Adams, Pop 4 is the melodic pop supergroup of 2015. Their hall-of-fame-worthy album, Summer, releasing soon, is destined to appear on many best-of lists this year. 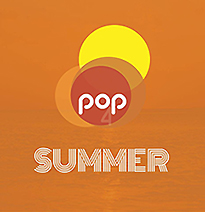 “Don’t You Be Like That” is a luscious mid-tempo ballad painted with a harmony-soaked brush and the sweetest, most seductive melody we’ve heard in a very long time. The combination of enticing lead vocals from Andrea, Kirk and Scott; a middle-eight sent from nowhere less than heaven, and a subtle, George Harrison-esque electric guitar run come together to produce a song that will stay with you long after you’ve heard it. And, trust us–you’ll want to hear it again, and again, and again still.

“Don’t You Be Like That” is one of the catchiest songs we’ve heard in ages. Don’t miss the album from which it comes when it drops later this summer which, by the way, is now officially our favorite season of this year.

Don’t miss the exclusive worldwide radio premiere of Pop 4’s “Don’t You Be Like That” tonight, July 14, at 8 pm ET on Pure Pop Radio! And stay tuned after the Pop 4 premiere for more of the greatest melodic pop music in the universe, streaming to you 24-hours-a-day. We thank you!